The familiar form of the Chinese Moon Gate captures within its circular frame a lush urban landscape and the commotion of community.

Traditional yet Transformative
A staple of classical Chinese architecture, the Moon Gate captures lush garden landscapes within its circular frame. Inspired by the Moon Gate’s duality as both a gateway and a window, the Chinatown Gateway takes on the new form of a circular archway. Standing 48’ tall, the circular archway transforms the traditional paifangs (or gateways) greeting visitors to Chinatowns around the world into a unique form - the universal symbol of inclusion and harmony. Balancing respect for Chinese design heritage while serving an expanded role as a marker not just for Chinatown but Lower Manhattan at large, the Gateway captures the everchanging streetscapes of Chinatown and its vicinity within its portal.

Iconic yet Welcoming
Nestled within the circular archway is seating for 40 persons, a performance space, and a garden containing the 5 Gingko trees currently on the urban site. The archway is monumental without sacrificing humanism: too often, “iconic” public spaces intimidate rather than accommodate. With bleacher seating for 20 on either end of the loop, the new Gateway creates a lightly sheltered plaza for cultural events – the kind of space that Chinatown has not enjoyed for decades. Immediately iconic, the Gateway’s distinctive silhouette also serves as a wayfinding beacon bridging Chinatown and Little Italy. Located within the triangular plaza are two totems that combine the standard WalkNYC wayfinding displays.

Flexible and Efficient
Eschewing pre-determined programming for flexibility, the Gateway is future-proofed against obsolescence. Arrayed along its underside are hooks from which banners, lanterns, and other devices could be hung from. This activates the Archway throughout the year, from the Spring Lantern Festival to the Mid-Autumn Festival, allowing it to host a wide range of events. While simple, the archway is not low-tech: Embedded on its outer surface are cost-effective but crowd-pleasing interactive lighting system that responds to visitor’s motions via an app. The Gateway thus becomes more than a gate to Chinatown but an interactive destination unto itself.

Cultural History and Collective Future
The Chinatown Archway draws upon cultural history in order to look towards our collective future. It is a new urban icon that does not merely mark the entrance to Chinatown but stands as a unifying beacon for the all of Lower Manhattan including Tribeca to the west, Little Italy to the north, and the Lower East Side to the northeast. At the intersection of many converging paths, the Chinatown Gateway will serve as a lasting icon to celebrate the various cultures that have contributed to this vibrant community.

A staple of Chinese architecture, the Moon Gate serves as both a gateway and a window. The Chinatown Gateway scales the traditional passage for a single visitor up to a gateway for an entire neighborhood.

Situated on Canal Street Triangle in Manhattan’s Chinatown, the Chinatown Gateway greets visitors with a unique circular form - the universal symbol of inclusion and harmony. 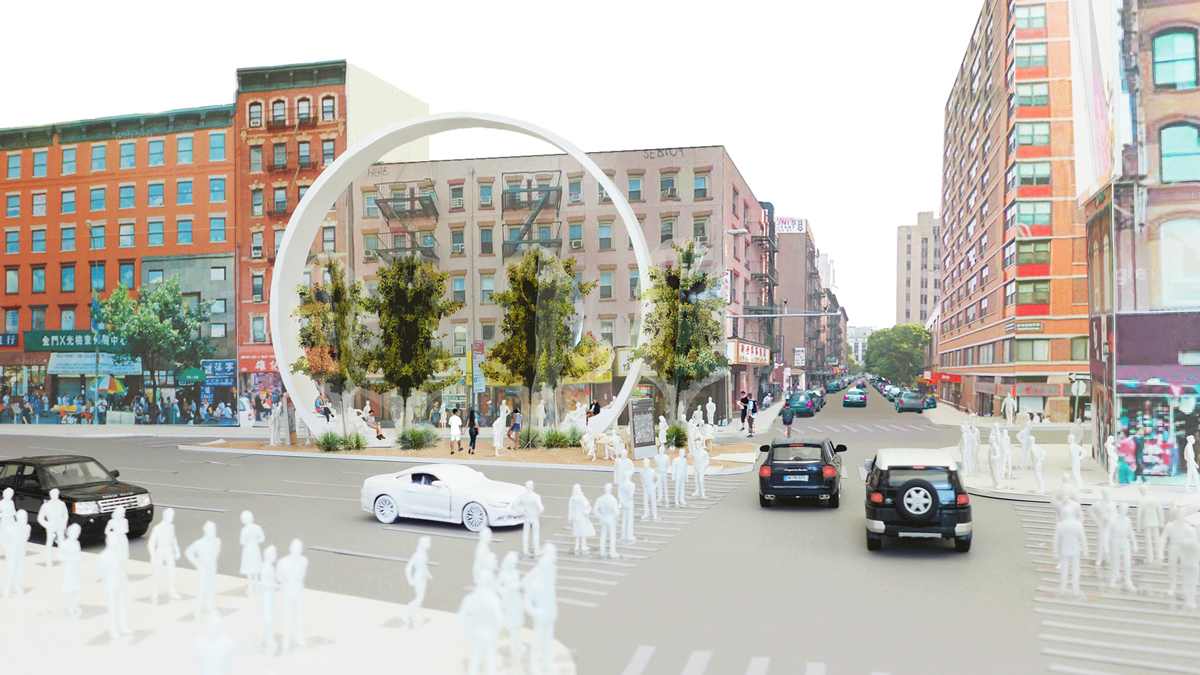 Nestled within the Gateway is public seating for forty visitors, a performance space, and an urban garden with five gingko trees. 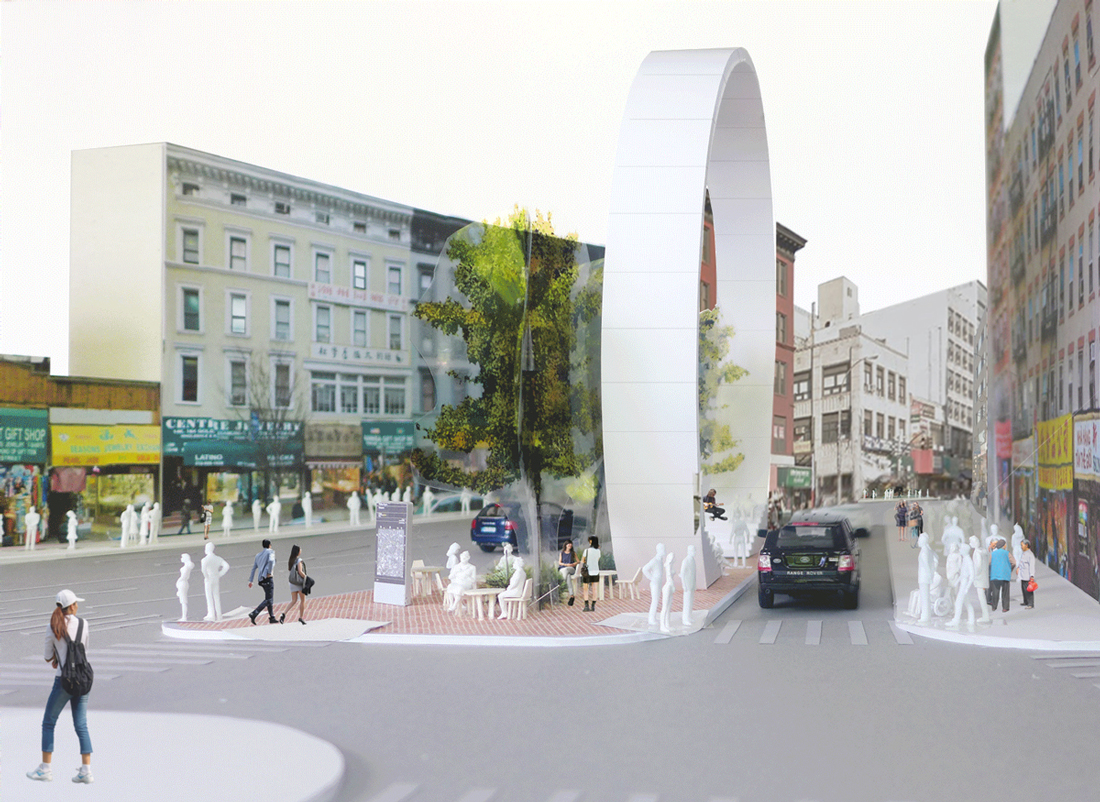 Balancing respect for Chinese design heritage and serving an expanded role as a marker for Lower Manhattan, the new Chinatown Gateway captures the ever-changing streetscapes within its portal. 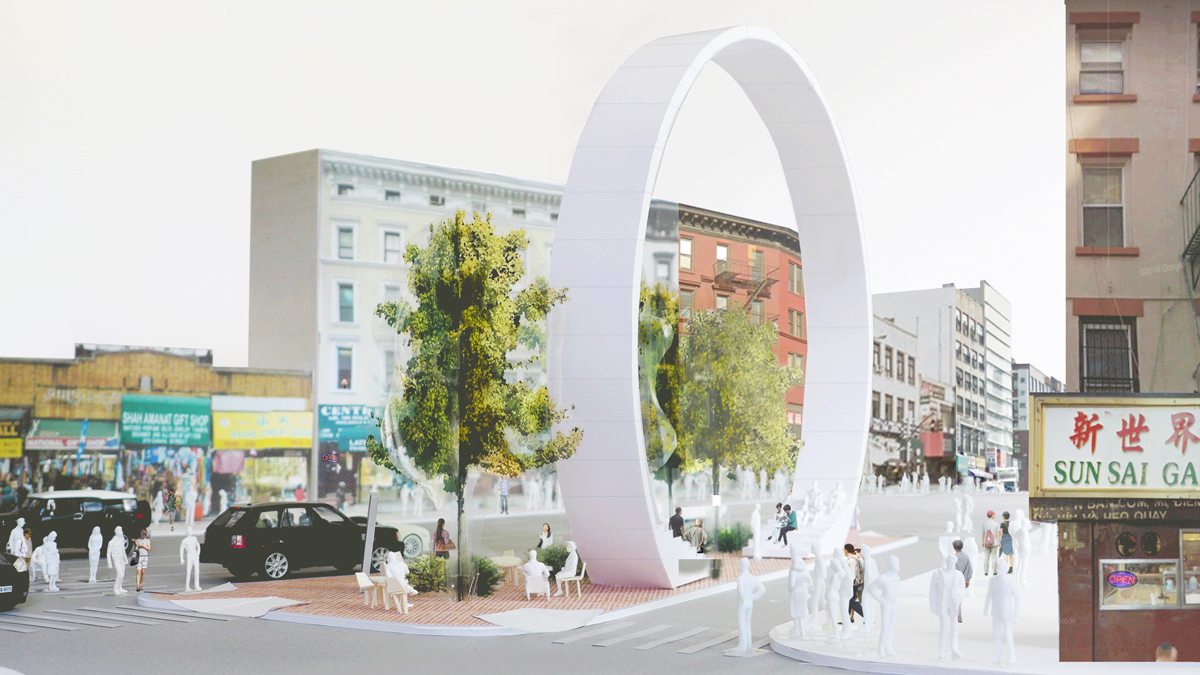 Standing 45’ tall, the circular archway transforms the traditional paifangs (or gateways) that greet visitors to Chinatowns around the world into a unique form - the universal symbol of inclusion and harmony.